Close Menu
Home > Blog > Car Accident > Can I Use Headphones While Driving?

Can I Use Headphones While Driving? 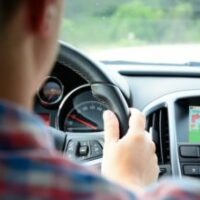 Not in Florida. While in the era of smartphones it is tempting to plug in your headphones and use them while driving, in Florida it is illegal to do so. In fact, it is illegal for drivers to wear any kind of headphones, including headsets and earbuds, while they are operating a vehicle. But while this law is strictly enforced, there are some exceptions.

One of the primary reasons for the law is that drivers need to be aware of their surroundings at all times. Even music coming from a car stereo that is too loud can distract drivers enough that it creates an unsafe environment. Notably, and perhaps not something you would think about, some safety experts also report that the cord from headphones could pose a strangulation hazard in the case of an accident.

In addition to the type of headphones included in the law, it is also important to understand what Florida law considers to be a vehicle. Vehicles under this law are not limited to just passenger vehicles and trucks, but also include bicycles and motorcycles. This may seem surprising to some, as cyclists can often be seen wearing headphones around the state. But just like driving, this poses the danger of the cyclist not being able to hear what is going on around them.

While the law in Florida is clear, there are still some exceptions that will allow drivers to wear headphones while driving. These include when a person is wearing a hearing aid device that is intended to improve their driving and police officers who are wearing headsets while conducting their business. Some motorcyclists can also use the speakers that are installed into their helmets, as many are. But there is a limitation to these types of speakers, as they cannot legally touch the rider’s ears.

And Florida law makes one more exception for drivers of other vehicles. In today’s world, the one in which people often feel the need to be attached to their smartphone at all times, the law has included the use of wearing one earphone that is connected to a phone and used for communication purposes only. It is still, however, against the law to listen to music through this one headphone. Also, only one ear may be covered when using these headphones, leaving the other ear exposed and able to hear surrounding noises.

Breaking these laws could not only cause an accident, but they can also leave a person wearing headphones to be found negligent in a personal injury lawsuit. It is the responsibility of all drivers, motorcyclists, and bicyclists, to take a proper duty of care to keep themselves and others safe while on the road. When they fail to do so, there can be very serious consequences.

By Slater Grant | Posted on March 31, 2018
« What to do After an Out-of-State Car Accident in Tampa
Steps a Lawyer Takes to Recover Tampa Truck Accident Damages »