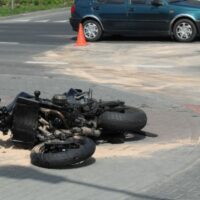 Around 12:25 p.m. on Sunday, 29-year-old David Walter Engberg of Land O’ Lakes was driving his 2012 Yamaha YZF-R1 north on U.S. 301. 73-year-old Shirley Ann Brooks, of Zephyrhills, was driving her 2018 Chevrolet Sonic. Engberg and Brooks approached the intersection of U.S. 301 and Daughtry Road in Pasco County. Brooks was making a left turn onto Daughtry Road from southbound U.S. 301 when she failed to yield to oncoming traffic.

Brooks cut-off Engberg as she made her left turn, resulting in the front of Engberg’s motorcycle to crash into her Sonic. Engberg died at the scene of the crash.

By Slater Grant | Posted on November 24, 2019
« Blind Spots: One Reason Why Accidents Occur and How They can be Managed
Ways to Stay Safe when Traveling Over Thanksgiving Week »