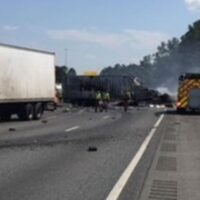 44-year-old truck driver, Jean Sainca, was killed on I-75 Wednesday, September 17, 2019 when another semi-truck was experiencing front left tire issues and hit Jean’s semi-truck at 2:25 p.m. Sainca’s semi-truck became engulfed in flames when David Drummond’s semi-truck had tire issues. Mr. Drummond hit Sainca, then ran into a guardrail. A third semi-truck and a 2016 Jeep Cherokee were also involved in the accident and suffered significant damages. I-75’s southbound lanes and mile marker 414 outside lane were shut down for the remainder of the day then reopened Thursday afternoon.